On Saturday October 6th I was scheduled to moderate a panel on “Art in Public” for the O+ Festival during the same timeframe that the Senate was expected to confirm the sexual predator Brett Kavanaugh to the Supreme Court (and of course, they did). Anticipating coming out of the panel to the heartbreaking—but not surprising—news that the GOP majority voted to uphold Kavanaugh’s white Christian heterosexual cismale privilege, I posted on Twitter and Facebook asking if anyone wanted to join me for a primal scream after the panel. No one replied, but I screamed in my car anyway. I drove home feeling rage and despair, only finding comfort by drawing on the conversation I had earlier with panelists JESS X SNOW and Tani Ikeda about their Survivor Love Letter mural (painted by JESS and Layqa Nuna Yawar). Painted on the front of the Family of Woodstock Shelter in Kingston, NY., the mural celebrates survivors and actively supports collective healing in the face of continual injustice, oppression, violence, and silence.

About two weeks after (in)Justice Kavanaugh’s confirmation to the Supreme Court, excerpts of Blasey Ford’s testimony appeared on every one of my social media feeds. Her words were spray-painted on the ground, the walls, and the doors of Kavanaugh’s alma mater, Yale University. They read: “INDELIBLE IN THE HIPPOCAMPUS IS THE LAUGHTER;” “I THOUGHT THAT BRETT WAS ACCIDENTALLY GOING TO KILL ME”; “I HAVE HAD TO RELIVE MY TRAUMA IN FRONT OF THE ENTIRE WORLD.” The quotes were complemented by posters covering bulletin boards that proclaimed “YALE IS COMPLICIT” in a purposefully alarming shade of red. The white block letters appearing at the law school’s main entrance, on the Lawrance Hall doors, and on the sign of Sprague Hall re-awakened a rage in me that was so powerful it made my stomach hurt. I can’t imagine what it was like for Yale students, faculty, and staff to experience them firsthand before they were removed. For us—the spectators who shouted we #BelieveSurvivors in an attempt to block his confirmation—Blasey Ford’s words are what remains indelible in our collective hippocampus.

Just a few days after those images circulated (and oh, how I shared them), “Lilith” reached out to me. Here they were: the street artists responsible for spray painting Blasey Ford’s words into the visual public sphere and refusing to let Kavanaugh’s crimes be forgotten with the next segment of breaking news.

Lilith’s act of rebellion is a visual version of the emotions we’ve seen survivors and their accomplices express in sonic (primal scream), metaphysical (hexing him), and political form (getting arrested). The incentive behind writing your name on a wall is to communicate and validate your existence: it is a declaration of presence—“I AM HERE.” It is the projection of self in the face of continual social and political erasure. In my book, Graffiti Grrlz: Performing Feminism in the Hip Hop Diaspora (2018), I argue that we can trace performances of feminism in the writing on the wall. I ask readers to conceptualize feminism as a verb so we can ask: what does it do? In the case of Hip Hop graffiti—where the writing on the wall is usually a tag name—the feminist “politic” is not as evident as it is in this act, where the quotes from Blasey Ford’s testimony trigger a recognition of the power relations that enabled a sexual predator to be nominated (by another sexual predator) and confirmed. And yet, the same questions that I use in the book to understand how feminism emerges through the writing on the wall can be applied: does it foster empowerment, does it cultivate community, does it promote social justice, does it assert presence in public space, does it restore bodily agency?

The answer is a resounding: YES.

Here, the writing was done to mark the presence of Blasey Ford in her absence, in her erasure. Lilith’s anonymity lets us imagine the act was done for us, and could’ve been done by any of us. The crucial aspect of #MeToo as a social media utterance is not found only in the “me,” but critically in the “too.” If we, as a collective, take an active hand (in whichever way we can) in asserting our presence they cannot erase us, minimize our pain, steal our power, or rationalize our subordination.

On behalf of all survivors, I want to say thank you to Lilith. Because though their act was on behalf of others, only they risked the legal repercussions of painting outside the lines of socially acceptable behavior.

Jessica: Have you ever done street art before? Do you think of yourself as a street artist?

Lilith: Yes, we’ve been involved with street art before, but this is our first foray into graffiti as anti-patriarchal activism.

Jessica: How did the idea to spray paint her words come about?

Lilith:  The thought to do something along these lines occurred a few days before Kavanaugh’s hearing when Mitch the bitch McConnell claimed that the ‘Blasey-Ford situation’–Republicans hold Ford accountable instead of Kavanaugh–would “blow over” within a couple of months. Like so many other sexual assaults, they occur and then are seemingly forgotten about by everyone but the survivor–we won’t let that happen. Thank you Mitch for inciting this visual riot.

Jessica: What ties you to Blasey Ford?

Lilith: “Dr. King’s policy was that nonviolence would achieve the gains for black people in the United States. His major assumption was that if you are nonviolent, if you suffer, your opponent will see your suffering and will be moved to change his heart. That’s very good. He only made one fallacious assumption: In order for nonviolence to work, your opponent must have a conscience. The United States has none.”* Yale has none. We believe it is impossible to be conscious of the violence on campus, in our bedrooms, and in our learning and commit to only ‘permitted’ actions against the university that accommodates and profits directly from violence—from reproducing and reinforcing an elite class to exploiting the city of New Haven every day.

Jessica: What is the significance of the three locations?

Lilith: Our locations are significant simply because they are on Yale University’s campus- every inch is complicit.

Jessica: Did you also do the “Yale is Complicit” signs? They both appeared Monday morning: was it a coordinated effort?

Lilith: Yeah, what do you think?**

Jessica: Why did you do it, knowing the risks for being charged with vandalism? Why was it important to go beyond the sit ins, the bulletin boards, and the posters on the walls?

Lilith: The elitist bullshit that Yale shoves down the throats of both their students and New Haven Residents is atrocious. Yale actively works to silence survivors and shame them out of coming forward. 154 cases of sexual misconduct were brought forth to the Provost at Yale last semester, and we all know there are probably three times as many cases that are unreported. Yale’s sexual misconduct policies encourage silence by setting the terms of justice and systematically let abusers off the hook after re-victimizing survivors. Under Yale’s “court of law”,  legacy students, “prodigies”, and their faculty remain unscathed by accusations of sexual misconduct, shielded by the University. Yale knows what they are doing and can very easily put an end to it but won’t because of the money to be made off of rapist alumni. We know that Yale’s administration has no conscience, but we know that students and the public do. They will continue the fight as they have done throughout history to put an end to unjust sexual misconduct policies across Yale and begin to dismantle the institutions that continue to give rapists and sexual assailants advances, credibility, and authority.

Jessica: You’ve generated a great deal of buzz, what’s that like for you?

Lilith: The response we received wasn’t expected but it isn’t unwelcome. We hope that those who write about our protest focus on the contexts of quotes and call out decision-makers by name. Their silence completes the damage of violence by closing cases and conversations that must continue to reform our institutions and society.

Jessica: How do you see your action tied to the other instances of feminist resistance to Kavanaugh’s nomination and eventual confirmation?

Lilith: This is a fight fought on many fronts. We are just trying to do our best with the battle we are a part of. Eventually, with pressure from all sides, the titan will fall.

Jessica: Did you have a goal in mind and did you meet that goal?

Lilith: Our goal was to wake people up with our first drop, and we aim to continue to do that.

Lilith: Yale creates rapists. It creates them, puts them into power, and protects them. So it’s not inconsistent for Brett Kavanaugh to be a rapist, it’s actually entirely consistent with the interests of reproducing the ruling class. His confirmation to the Supreme Court reflects the power that Yale’s accreditation has. Mitch McConnell is counting on all of us to move on, but we won’t stop until we dismantle Yale brick by brick.

**Love the posters. Love all of it.

After this went live, Lilith sent me NEW PHOTOS: 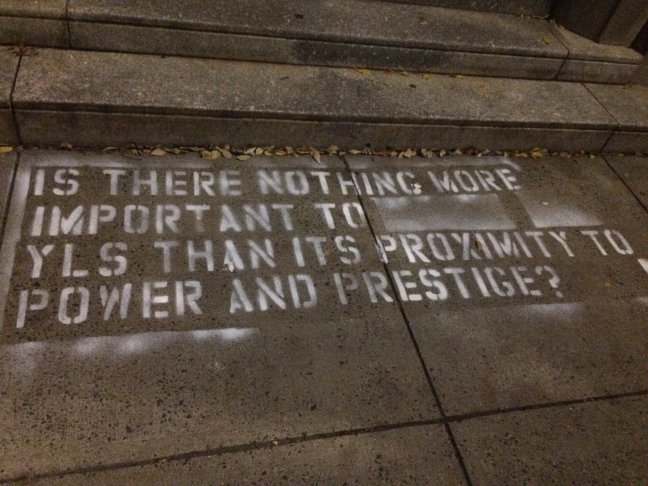 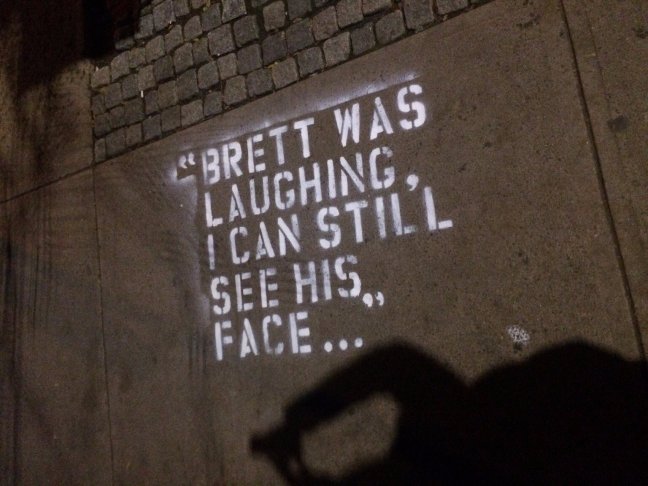 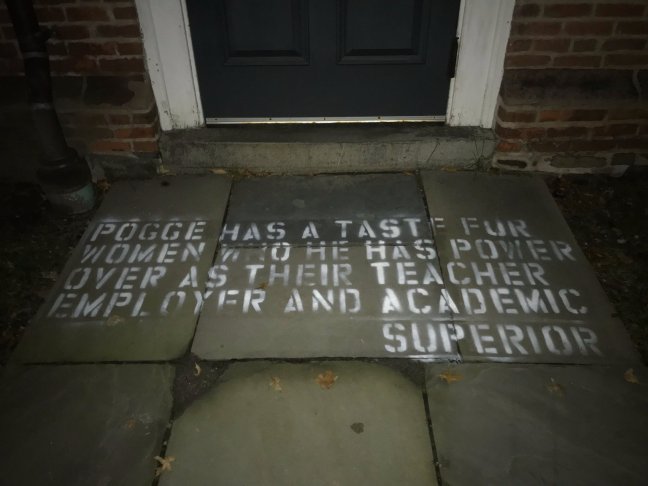 One thought on “Indelible in Our Collective Hippocampus is Her Testimony: Performing Feminism after Kavanaugh’s Confirmation”