Call for New York Graffiti Artists: Wonder, Movement, and Spectacle in Public Places: Investigating and Recovering the Shared Histories of Circus Art and Graffiti in New York and Chicago

We are searching for artists who would like to participate in a week of artist-to-artist workshops, and then workshop open to the public, and a final performance that explores the potential connections (and disconnections) between graffiti and circus. The workshops, called “Urban Acrobatics,” will involve a combination of demonstration and improvisation. Photographs and film clips from the New York based workshop will be displayed in a culminating exhibition in Chicago in 2014.

The first stage of this project will take place in New York City. Artist-to-artist/improvisory workshops will take place in the evening September 2nd to 5th. The weekend of September 6th to 7th artists will perform live painting, or lead graffiti (tagging) workshops, and scholars/artists will discuss the history of graffiti and circus. On September 9th artists who have participated in the workshops will have the opportunity to stage a circus-graffiti performance, tentatively titled, “A Graffiti and Circus Spectacular.”

Why experiment with combining graffiti and circus? For many, going to the circus for the first time offers an otherworldly experience of wonder, excitement, and surprise: circus artists stretch human physical limits using an aesthetic that also seeks to break the bounds of the imagination (See video clip). Similarly, seeing one’s first elaborate graffiti mural being painted live, standing at the feet of monumental paintings that inject a sense of whimsy into the everyday offers the viewer an experience of imaginative release (See figures 1-4). Although not visible at first glance, circus and graffiti have a great deal in common in terms of their relation to the public, institutional support, aesthetic, and their (estranged) relations to the art world. Both genres are outsider art that receives minimal official funding, mediums that induce wonder and spectacle, and art forms based on movement. Although tentative steps have been made to link the two art forms, such as Twyla Tharp’s 1973 Deuce Coupe production involving dance and live graffiti (figure 5) and Traces, by 7Fingers a performance that involved live body painting and projection (figure 6), this project concretizes the possibilities for creative exchange and growth in a timely moment of debate over public art.

Interested artists should contact Caitlin Bruce bruce.caitlin@gmail.com by August 5, 2013 and send a short proposal for what they would like to contribute, as well as some samples of their work. Feel free to send any questions that you might have: we welcome your ideas and look forward to collaborating with you.

Figure 3. Funk King graffiti mural by Demon and One Stefen at 30th and Kedzie, Chicago. Photograph by Caitlin Bruce September 2012. 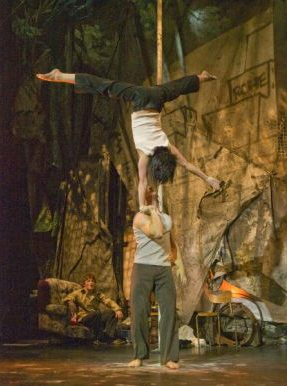 One thought on “Call for New York Graffiti Artists”

Leave a Reply to U got no street cred... Cancel reply