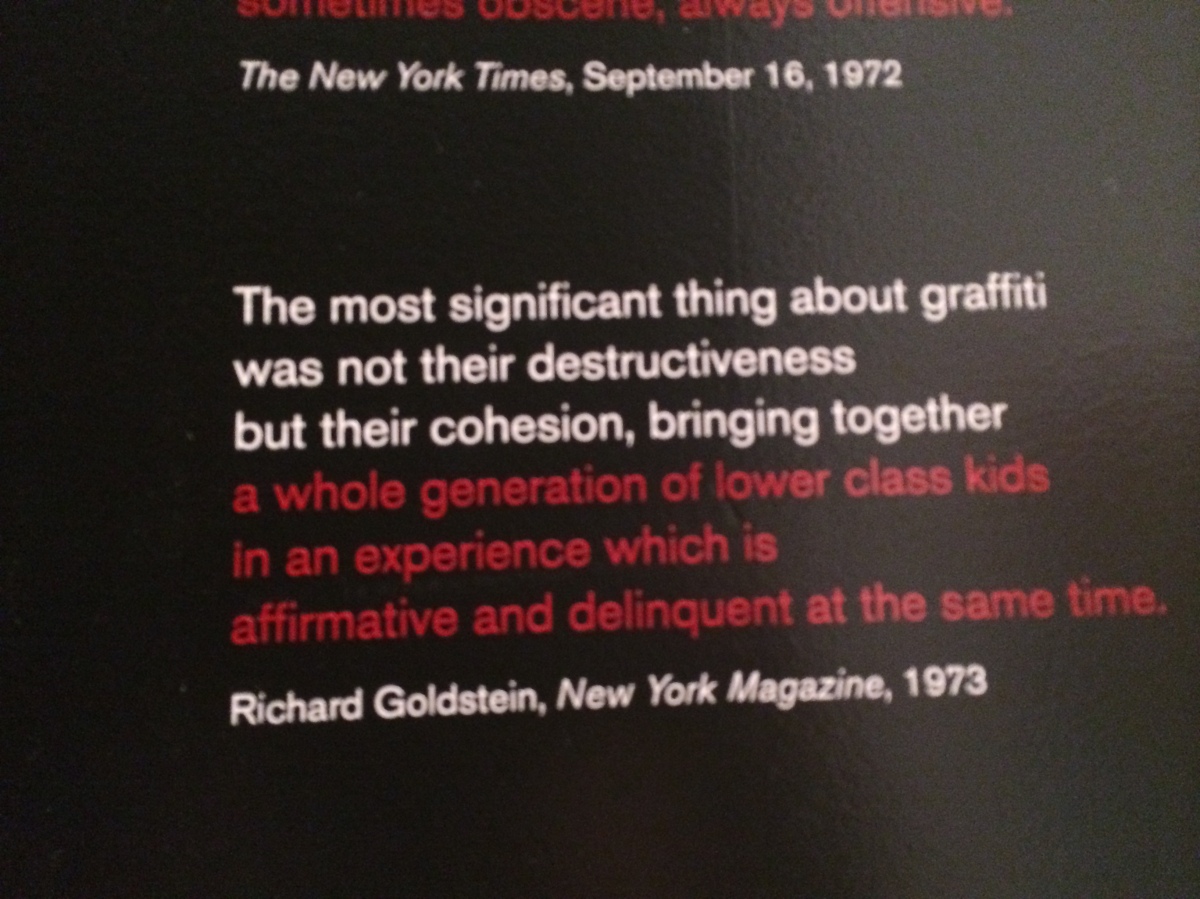 About 3 weeks ago I was back in New York City for a handful of days, thoroughly enjoying the dark skies, slushy snow, and freezing wind. What can I say? I’m a winter baby. I had a short list of critical TO DO’s for my visit: 1. eat any and all Latin American food (things like tostones y arroz con habichuela don’t exist here in Abu Dhabi, neither do proper burritos); 2. eat all the pizza you can get your hands on; 3. eat a burger smothered in dill pickles; 4. stock up on all the things you take for granted (like unscented soap for sensitive skin); 5. walk through the village; 6. visit 5pointz and witness the disgraceful remains of the whitewashing; and finally, go see City as Canvas: Graffiti Art from the Martin Wong Collection. My priorities revolved around food and graffiti…but, considering where I was and what I do, that probably makes a lot of sense.

I didn’t know it, but I have been waiting for something like City as Canvas for almost four years.

I first learned about Wong—the East Village Chinese American artist/advocate/collector who died from AIDS related causes in 1999—in 2009. The Asian/Pacific/American Institute at New York University hosted a panel discussion and organized an exhibition highlighting the cultural context of 80s and 90s NYC within which Wong and his friends lived and worked called Art, Archives, and Activism: Martin Wong’s Downtown Crossings. The exhibition was created with works drawn from the Fales library, memorabilia from friends (like Lee, Charlie Ahearn), Semaphore Gallery, and PPOW Gallery. Sitting on the panel, Lady Pink and Hugo Martinez described him and his commitment to their work and graffiti subculture in the 80s/90s culture wars and amidst yet another push for NYC’s “urban renewal.” I remember thinking how his apartment must have been an extraordinary place, an intimate, precious, and unique vault of moments in NYC graffiti’s early history. I wanted to see it ALL.

The works in City as Canvas are also from the 80s, but the 70s are present as well. Turns out, in 1993/1994 Wong donated the “treasure trove” that was his apartment to the City Museum; he had been collecting since 1982. Viewers can watch clips of Wong talking to friends on the phone about his decision; there is also a short video (by Ahearn) of writers like Lee and Daze talking about Wong, looking at the memorabilia, and explaining the context of the work. Described by Felicia Lee in the New York Times, as the “remnants of the schism between the outlaw art form and mainstream institutions,” on view are: blackbooks—so many blackbooks—encased in glass just asking to be thumbed through (that part is a tad torturous); giant pieces of scrap plywood painted by Futura 2000 and Zephyr; a bust of Jesus altered by LAII’s markings; a too cool wooden grid of tags collected by Wicked Gary; framed Martha Cooper originals, including the infamous Dondi photo; a video of painted trains passing by; and spray-painted jean jackets (this photoblog has a nice bit of images). For certain writers, you can see the original piece that you’ve only seen in books. You can also see really early sketches and works on canvas, where space, color, line, depth, and medium were being tested and innovated. It’s impossible to process everything at once. I gotta go back.

New York Magazine’s “Approval Matrix” placed City as Canvas right at the intersection of highbrow, lowbrow, brilliant, and despicable (technically in the highbrow and brilliant square)—a fitting spot for a show on graffiti art in a city that has always had a love/hate, consume/reject, celebrate/criminalize bipolar relationship with the movement.

Basically, my message here is simple: IF YOU HAVEN’T SEEN IT YET, GO. You have until August. You can purchase the exhibition book at the museum gift shop along with all kinds of goodies, like this mug that I simply had to have.

Support the important cultural work this show is doing for graffiti subculture, the writers, the aficionados, and the advocates. If you have not been to a museum since high school, or think all museums are places of “high art” snobbery…take thee to this exhibition. This is your history NYC; part of a movement born on your streets that speaks to those beyond those streets and thrives in cities around the world. Like Wong, we must recognize the worth in a genre of art making labeled criminal or aesthetically displeasing. In a capitalist world drowning in the proper, the conventional, the luxurious, and the mainstream (pop culture), we must support the despicable, the alternative, and the lowbrow popular cultures—the cultures of the people.